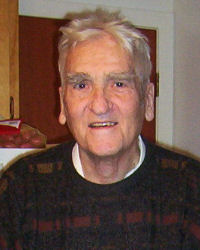 I was born in Denmark in 1926, and came to Nova Scotia with my parents at age three.My father was a farmer, and my childhood was spent on five farms in Pictou County and Truro. Thirteen years after our arrival Dad was able to start his own operation at Abercrombie.

I attended rural one-room schools in my early years, and graduated from Colchester County Academy (Truro) in 1942. In 1943 I entered Dalhousie University.There I obtained a Masters in History, and went on to Pine Hill Divinity Hall. I spent five summers on student mission fields in Nova Scotia and Saskatchewan, and in 1950 was ordained by Maritime Conference of the United Church of Canada. 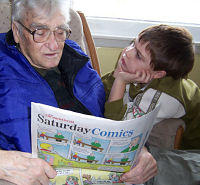 Reading the most important part of the newspaper to my grandson

During the mid-1990s I was active in the effort to seek justice and protection for four crewmembers of the Maersk Dubai who had spoken out about the murders of stowaways they had witnessed on board the ship, and for their families in the Philippines who were experiencing reprisals for the seamen’s testimony.  Our work culminated in the four seamen belatedly receiving Landed Immigrant status and the arrival of the four families in Canada.

In 2001, my daughter and her husband made me an offer I could not refuse, and since that time I have lived with them and my grandson, first in Kentville and latterly near Mahone Bay.

I have three daughters and a son.

While in New Brunswick I wrote the history of the Charlo-New Mills-Jacquet River churches (with help from local people). In 1972 I wrote the history of the Berwick Camp Meeting, an enterprise started by the Methodist Church in 1872 and continued by the United Church since 1925. In 1986 I chaired a committee writing a Study Guide to the Canadian Charter of Rights and Freedoms for the Maritime Conference of the United Church. I have also researched and written family histories.

Since coming to the South Shore I have written (with help from the church’s history committee) a History of Trinity United Church, Mahone Bay.

In addition, I have over the years often pestered the newspapers and various politicians with correspondence on social and political subjects. Some of the politicians have even replied.