Viggo Holm as a young man

“Far’ is the Danish word for ‘Dad” or “Father”. The older, formal word “Fader” is obsolete, unless one is speaking of God.

Far’s earliest memory was of going with his father to the site where the community hall, “Frem” was being built, and seeing the building materials on the ground. That was in 1905. “Frem” was the hall that his parents were to care for from 1915 to 1934.

In early childhood Dad wanted to be a baker so he could provide cakes for his mother. He always had a sweet tooth. Like his father, he had a cowlick in his hair (“tjyraslik” or bull- lick in Bomholmsk). As a little fellow, four or so, he was in the barn when a bull calf licked the back of his neck. His retort was, “Ska jâ ha tjyraslik i nakkijn og?” – “Am I to have a bull lick in my neck too?” It was spoken in the East Bornholm dialect. A person from “over” would not have understood.

At the age of six he went with his mother to a wharf where fishermen were landing their catch, and there he made his first earnings, working beside his mother. The small Baltic herring were being prepared for processing in the large smoke ovens. Two such herring were joined by placing a small wooden peg through the gills so they could be hung on racks and inserted in the ovens. Dad earned one ore for every pair he joined.

For fun he and Johannes cut paper dolls out of magazines and catalogues and played with them; he remembered being displeased when Johannes decapitated his dolls with the scissors. They made toy animals out of corks, hair and matchsticks; nearly all their toys were home made. There were few books in the house: a Bible, a hymn/song book and one or two others. His father regarded reading fiction as a waste of time. Three or four neighbours banded together to subscribe to two periodicals, one of which was the weekly published by the Methodist Church.

Dad attended the rural school in Povlsker in 1906, then the town school in Neksø for three years, and three more years back in Povlsker. In the rural school he attended three days per week, the teacher having another class on the other three days. His teacher at Povisker was an old man who had outlived his usefulness as a teacher; as a result, when Dad later continued his education he felt he had insufficient grounding in some subjects, particularly mathematics. Dad’s writing was neater than that of his teacher, so he would do the writing on the blackboard for him. One of his duties at Povlsker School was to look after his teacher’s cow.

Dad had a temper when he was a boy, and one day his mother took him aside and told him the story of her father and the murder he had committed when he became angry. The story made a lasting impression, and thereafter Dad kept his temper in check. The anger was often there in adult years, but by a great effort of will he held it under control. That effort started so early, must have added to his strength of character, but perhaps also to his stress over the years.

He remembered the time of the First World War, when many commodities were scarce in Denmark due to the blockades. The family sometimes had to make do with barley porridge and picked herring twice a day. They put molasses or margarine on their porridge instead of sugar. Coffee substitute was made by burning wheat, and tobacco substitute and tea from cherry leaves. When they were not able to obtain bicycle tires they used rope instead. 80 herring sold for five ore (one cent); then the fishermen formed a union and fixed the price up to ten ore. At the coop store the shopper might receive a candy or two as a bonus; these were saved to be given to the children at Christmas.

When Dad was twelve he went to work on a neighbouring farm for the summer, and lived there. 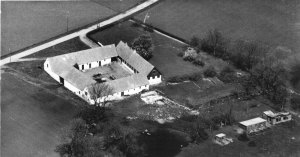 In 1915 he was fourteen and, like his siblings, stopped school. No more education was available in Povlsker. In that year Grandfather sold Lille Pilegård to Ludvig, and Dad stayed on for a year. Later he worked on three other farms, a year on each. That was the way young men learned farming, when they were not able to attend an agricultural school. On one farm he felt the owner expected far too much of a hired girl when the turnips were being harvested; she was to pull as many turnips (and cut off the tops) as the men could haul home. Dad defended her and managed to ameliorate her situation somewhat. The fact that the incident stuck in his mind through the years indicates how difficult it must have been for him to take such a stand. It was a harbinger of his attitude to injustice in later years.

In 1917 the weather was exceptionally dry, fodder was scarce during the winter and the animals suffered. Due to the war it was impossible to import feed. On some farms the cows had to be transported to pasture by wagon in the spring as they were too weak to walk. Some people tore the thatch off the buildings to feed the cattle.

On Lillemyregård the cattle had suffered from tuberculosis some time before Dad arrived and had to be butchered. The result was that when he worked there the herd was being rebuilt and consisted of 6-8 older cows and about 20 young heifers that had just had their first calf; their teats were small and they were difficult to milk. In addition there were calves and pigs to look after. The animals were Dad’s responsibility and the work was hard, especially the milking. His hands were often sore but became unusually broad and strong as a result.

He spent one summer hauling wood out of Almindingen, the largest forest on Bornholm and the third largest in Denmark. He also spent some time working at a factory where Rockfort cheese was produced; his job was cutting the firewood for the factory.

Finally he spent one year working for his brother-in-law and cousin, Jens Holm. Onkel Jens was a skilled and creative cabinet-maker, and Dad emerged from the experience with the ability to make wooden toys and a number of items of furniture which are still in use in the family.

He had a hankering for higher learning however, and became the first member of the family to obtain secondary education. 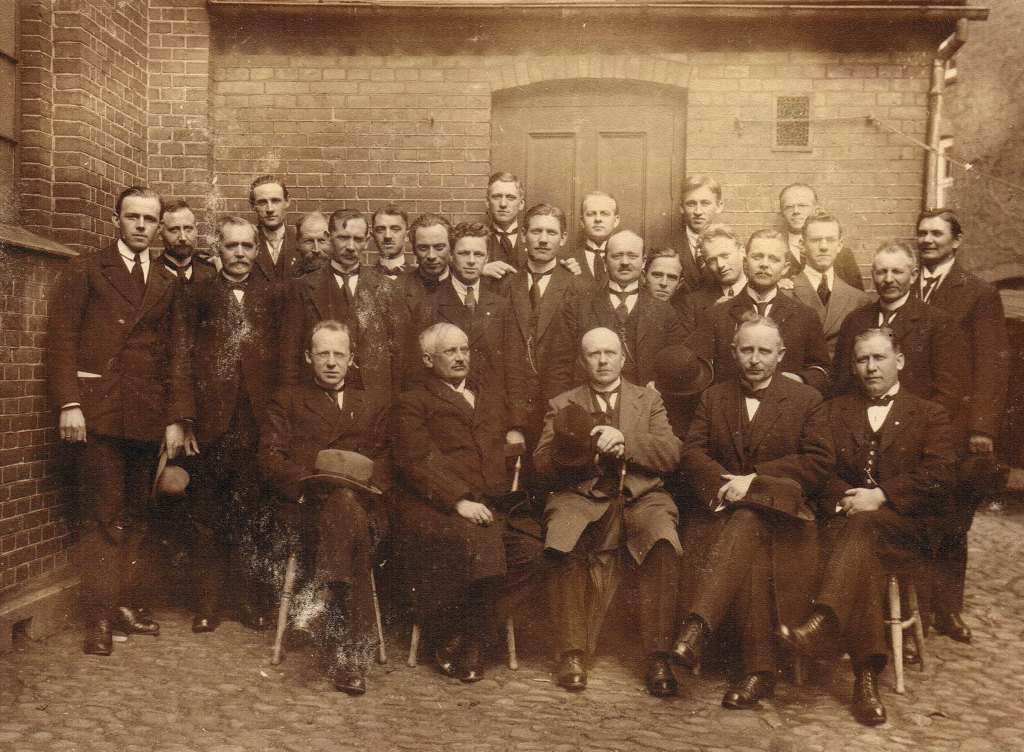 As an initial step he attended a Methodist Folk School, located in Arhus, Jutland, for about three months, January to April, 1920. The men attended in the winter, the women in the summer. There he took courses in Bible, literature, history, writing and English, and at the Methodist Church he made up for the monastic environment at the school. He worked on a farm in Jutland during the summer, and decided to study further, with the ministry as his goal. 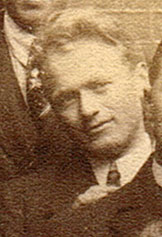 Then followed an intensive course in a private school in Århus, lasting about a year and a half and leading to matriculation. Such a program of studies normally took three years. He told us that he used to study until the birds were singing in the morning. He felt very keenly his lack of preparation in the rural school in Povlsker. About twelve students took the course and one of them, Niels Pedersen, became his friend for life. The students were from 14 to 27 years of age. The studies included botany, zoology, Scandinavian history, world history, Danish literature and grammar, German and gymnastics. The Methodist Church paid his way, and many years later he refunded the money.

Following this experience Dad enrolled in the University of Århus, signing up for Latin, Greek and psychology. But he found the studies difficult and could not see how he could find the financial resources necessary to carry on, so after two weeks he quit. Throughout his studies his mother sent him an occasional krone when she could afford it. But money was scarce on Bornholm, with his father’s working capacity limited by his mobility problem.

Working for the Church.

There was more than one avenue toward the ordained ministry in the Methodist Church, and Dad entered on a less ambitious one. At the beginning of 1923 he became a full-time lay minister, stationed in Holstebro, Jutland, as assistant to Pastor Carl Bjerno. Between them and with the help of local preachers they held services in Holstebro, Skive, Lemvig, Thisted and other places in north-western Jutland. Dad also helped with Sunday schools and other youth work. 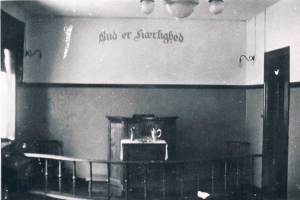 Bethel Chapel in Skive. The inscription reads “God is Love.”

In Skive Mother’s parents, Christian and Karen Birkholm were the center of a small congregation. In 1920 the church had purchased a property which had housed a tavern and some small apartments. The Birkholms lived in one apartment and the tavern was “converted” into a chapel. While Dad was there the chapel was enlarged and he helped with the renovation.

In Holstebro Dad lived with the Bjernos. They had three little boys, and as Dad loved small children he stored in his memory a number of stories of the antics of the little fellows.

While in Århus Dad had been fond of a nurse by the name of Johanne, a member of the local Methodist congregation. But he was deeply aware of the differences in background and education, and in a place and at a time when class distinctions mattered more than they do in Canada today he did not feel able to pursue the relationship (or the girl). Some years later Fru Bjerno died and Johanne eventually took her place. She and Carl had two sons, both of whom I met in Copenhagen in 1980. Henning was the treasurer of the national church and Mogens was the minister of the Jerusalem Church, the mother church of Methodism in Denmark. I also met Johanne, then widowed and living in Arhus, but at the time I did not connect her with Dad’s story.

Dan Christensen, who many years later was our baker in Abercrombie, attended the Methodist services held occasionally in Thisted.

During the summer of 1923 Dad was transferred to Fåborg on the large island of Fyn; where he worked with a little congregation for a further year. He lived in two small rooms in the church building and was paid 125 Kr. per month – about $30.00. He prepared most of his meals himself and lived very frugally. He would make øllebrød at the beginning of the week and heat it each day, adding water to it as it thickened.

1924 was a year of selling books, of working on farms, and of unemployment. At the beginning of 1925 he took a job with an insurance company, selling insurance and collecting payments in the Kjellerup area of central Jutland. He enjoyed riding around on his bicycle and making contact with the people, but salesmanship was never easy, and collecting from people who could ill afford to pay was even more difficult. He made 3,300 Kr. per year while in Kjellerup – good money at that time.

Then came marriage – but that is another chapter.